Evoca is using Next Gen TV to change the way we think about antennas forever.

Wrapping antennas in foil, carefully balancing them just right to get the evening news, then losing reception when the dog runs across the room – these were all part of watching television for almost sixty years in America. A lot of us still have to make tiny, micro adjustments to indoor antennas to get clear pictures. Indoor and outdoor antennas have been part of Americana, some utilitarian, some mid century masterpieces.

Evoca will launch Next Gen TV services in the summer of 2020, ushering in a new era of broadcast TV, that is unlike anything you’ve seen before. But, just like in the old days, antennas will play an all-important role in capturing these new, data-rich signals.

We are still developing Scout, our receiver that is the heart of Evoca’s service, but let’s take a look at the wild designs of antennas from the 1940s to the 2000s.

The Pioneers of Broadcast

Television history actually stretches back into the early 1900s, but for all practical purposes, television as we know it came into existence in 1927, when the first image was broadcast in an experiment by Philo Farnsworth. The first television station, W2XB in New York, went live in 1928. Shortly thereafter, the world was plunged into the Great Depression and television didn’t take off.

During this first decade of TV, only the wealthy had television. Antennas were giant, lumbering hulks strapped to rooftops and even then, television was very primitive by our standards. Actors had to wear thick, green makeup because cameras and televisions couldn’t even broadcast anything that was too white.

In the early days of TV, set-top antennas weren’t unknown, but were very rare and mostly useless. Larger outdoor antennas were needed to pick up the weaker signals.

A cable connected these large antennas directly to a single televisions set. Even then, the signal was typically weak and the reception primitive by today’s standards. To put it in perspective, modern 4K TVs have about 4,000 lines of resolution. These TVs had about 200 lines, or less than the worst possible YouTube resolution.

After World War II, the power of broadcast antennas increased, and continued to do so for decades. More powerful signals meant more people could pick up TV signals with smaller antennas. Even so, the late 1940s and early 1950s were still dominated by outdoor antennas, which had entered a sort of arms race to offer the best picture. There was a glut of antenna technology available at the time, from ‘stacked array’ antennas to rotary antennas that moved on a motor to find the strongest signal. 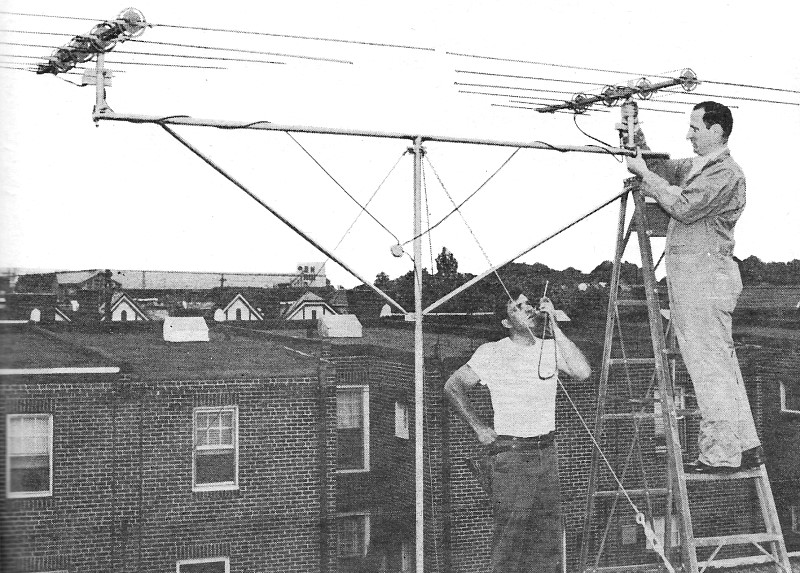 When most of us envision TV antennas (or at least those of us who are old enough to remember), we think about rabbit ears.

Created in 1953 by Marvin P. Middlemark, these dipole antennas were  lightweight and highly adjustable, making  it easy for someone to find the best possible signal in their house. Rabbit ears gave better control than a big rooftop antenna, even one mounted on a motorized rotor.  More than any other technology, Middlemark’s invention revolutionized television and is responsible for bringing TV to the masses.

Rabbit ears launched an endless stream of funky, vintage designs. They evolved over time but the basic principles didn’t change much until the 2000’s.

With the arrival of the first digital broadcast standard in the late 1990s, TV antennas began to shrink dramatically, mostly due to new design choices. The old rabbit ear antennas still work fine – if connected to the correct digital receiver (sometimes called a tuner). The digital receiver ‘decodes’ the signal and allows your TV to display the program you want to watch.

When American broadcast moved to the ATSC 1.0 standard in the early 2000’s, it was this digital receiver that was so important. People were tossing out their old TVs not because the antennas couldn’t pick up the new digital signal (they can, and still do!); but without a digital receiver, you just get static.

When Evoca TV goes live, we will be broadcasting from large antennas towers. In many markets we will repurpose existing towers, fitting them with Next Gen TV equipment (that’s what we’re doing in the Boise market at Bogus Basin). What makes Next Gen TV so different from previous antenna technologies is that it broadcasts lots and lots of narrow band signals. One of the many advantages of these signals is that they are better at reaching indoor antennas. And those signals won’t be interrupted by bad weather or a dog’s footsteps!

When Evoca launches this summer, you’ll need an antenna, and Scout, to receive the service. If you have an antenna that works today, you’ll be in great shape!

Scout does a lot more than just decode signals, though. We’ll introduce Scout in a future blog post.

Check Availability in Your area

This website uses cookies to improve your experience while you navigate through the website. Out of these cookies, the cookies that are categorized as necessary are stored on your browser as they are essential for the working of basic functionalities of the website. We also use third-party cookies that help us analyze and understand how you use this website. These cookies will be stored in your browser only with your consent. You also have the option to opt-out of these cookies. But opting out of some of these cookies may have an effect on your browsing experience.
Necessary Always Enabled
Necessary cookies are absolutely essential for the website to function properly. This category only includes cookies that ensures basic functionalities and security features of the website. These cookies do not store any personal information.
Non-necessary
Any cookies that may not be particularly necessary for the website to function and is used specifically to collect user personal data via analytics, ads, other embedded contents are termed as non-necessary cookies. It is mandatory to procure user consent prior to running these cookies on your website.
SAVE & ACCEPT

Is Evoca available in your area?